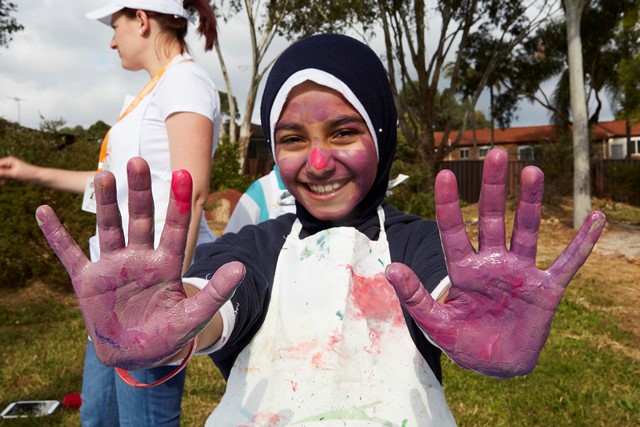 Following the devastation of the Black Saturday Bushfires in 2009, Melbourne Architect-turned-visual artist, Caroline Eshak-Liuzzi, volunteered as an Artist-in-residence at Marysville Primary School for three years. Within this transformative period in Caroline's life, she and a small group of vision-aligned volunteers worked with determination and passion to bring explorative art experiences to 35 children and adolescents who experienced a collective community trauma. Early on in her service at Marysville, Caroline registered a Not-for-profit organisation, "the Art Cabriolet" - a vehicle to provide her services and attract philanthropic funding.

During her time at Marysville, Caroline realised that story-telling through art-making enabled children to share adverse life experiences in a safe and collaborative environment. Compelled by her deep experience with the entire school community, Caroline raised $30,000 through a Melbourne-based artist initiative, to equip the school's new art room.

Within this new facility, Caroline and the students continued to connect and communicate through art-making, displaying their emotive works at local exhibitions - further sharing and consolidating their stories with their communities. During 2011, the first formal registered Board of the Art Cabriolet was established.

As her time at Marysville concluded, Caroline took the opportunity to meet with the Director of the Royal Children's Hospital Foundation, Brian Mallon, who further introduced the Art Cabriolet to the Education Institute of the Royal Children's Hospital. In 2012 the Art Cabriolet registered a publishing house, releasing "The Adventures of Fin and Aivilo", written and illustrated by inpatient children. The sequel, "The Adventures of Fin and Aivilo at the Beach" was published the following year.

During this time, Caroline collaborated with Koala Kids Foundation as an Artist-in-residence, working with End of Life (EOL) children and oncology patients, independently of the Art Cabriolet. By 2013, the Art Cabriolet became an established Public Benevolent Institution (PBI), with Tax Deductible Gift Recipient Status (DGR-1).

In 2014, Caroline concluded that the depth and scope of her work was potentially far greater and more significant than she had initially perceived, and the Art Cabriolet decided to employ its first qualified and registered Art Psychotherapist. By 2015 the staff had expanded to include fundraising management and front-of-house administration. This formulated the core team that still stands today.

In 2019, Creative Art Therapy Australia was born, the name change reflected the organisations growth and progressive leadership within the Creative Arts Therapy Industry.